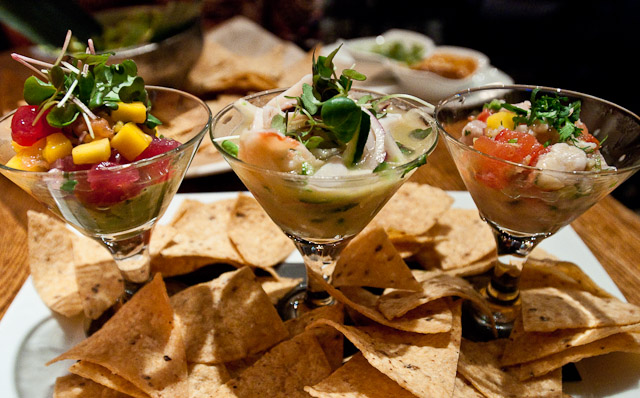 Alright, so the Lamb Shank special was stuff of legend. Awesome tender meat that fell off the bone. The mole, well, makes you want to learn how to make mole.

But lets talk Mexican staples that Frontera SHOULD knock out of the park. Guacamole. It’s featured on the menu and evidently one of Rick’s staples. I wanted to eat and say “wow, that was the best Guacamole in the history of Guacamole.” But no. I mean it was alright – its hard for mashed up avocado not to be, but I was expecting to be wowed. The to-go taco place down the block from me has bomb-ass avocado/tomato/onion style guacamole, and I don’t think any of their people has ever been on Food Network.

Ceviche. When I saw that trio-ceviche special I was ready to dine on an unparallelled bastion of the sea.  Of the three preparations the shrimp/squid/cucumber preparation was the tastiest, but the fruity fish preparation tasted iodine-y, and the classic ceviche was cray acidic. I wanted it to be great and it just wasn’t.

I do have to give it up for the service though. The server we had was on point – one of the friendlier servers I’ve met in a while.

There’s a plethora of great Mexican restaurants in Chicago, many quite a pretty penny cheaper than Frontera, many with food that does not disappoint.