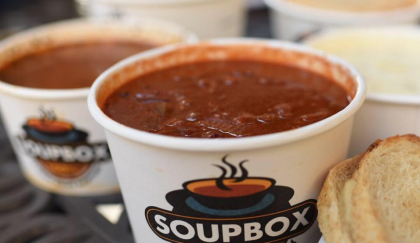 I can’t help but imagine the Soup Nazi episode of Seinfeld every time I go to Soupbox.  I feel like at some point I’m going to ask a weird question about one of the soups and the guy working the register will snatch my soup away from me while shouting “NO SOUP FOR YOU!” That would be pretty awesome, minus the not getting soup part.

Seriously though Soupbox has a massive array of awesome soup varieties. All homemade, all extremely good. I’ve tried the Lobster Bisque, the Signature Chicken and Rice and the Rosemary Chicken. All the best soup I’ve had of that soup varietal.

To me the standout is the Lobster Bisque, but like Jerry and the crew in the Seinfeld Soup Nazi episode, everyone I’ve repeatedly eaten with at Soupbox has a flavor that they salivate over. Also I have to note that I ordered delivery once and they were there lightening-quick, almost Jimmy Johns fast. Almost.