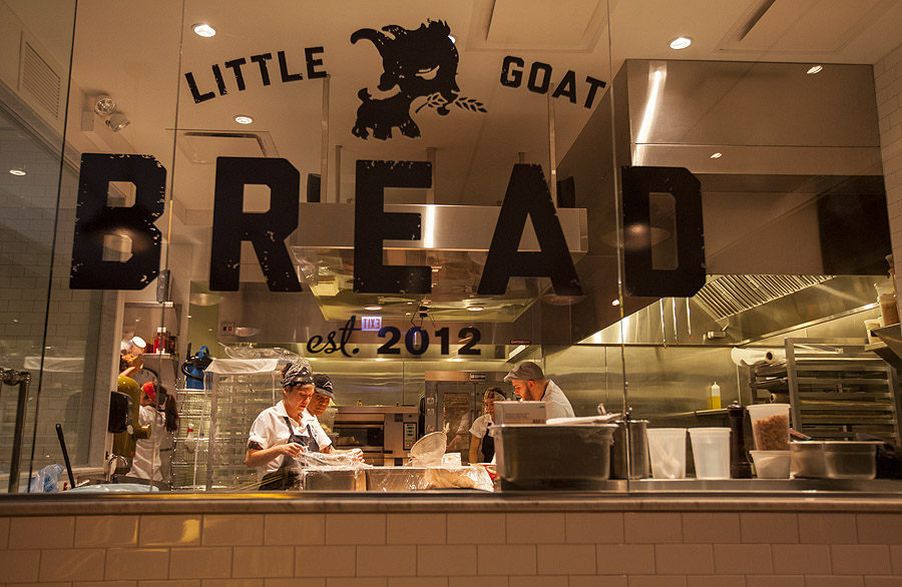 If drinking craft cocktails on a hot summer day underneath a massive rotating goat sign is wrong, I don’t wanna be right.

The roof bar was everything you could hope for in a rooftop – comfortable couch seating, bar staff knocking down drinks with the customers, watermelon based booze, and everyone just generally having a great time. It’s small, reminds me of a casual summer get together on the roof deck of a condo, but the giant goat reminds that yes, you are at a restaurant by the Top Chef herself.

The food is simply amazing – it’s stuff you’ve seen before: giant sandwiches, pancakes, cinnamon buns, nachos, but simply the best versions of those dishes that you’ve ever seen or eaten.

We happened to get sat right at the pass (where the food goes from kitchen to table) and we not only got to see almost every dish on the menu pass by (I have never gotten so hungry waiting for MY food before), but we got to see the kitchen in action. It was like watching a cooking show on the Food Network, but live. Watching the kitchen peeps hustle and flow was almost as enjoyable as the phenomenal Los Drowned Sandwich we ordered. It was a french dip sandwich at it’s core, but Stephanie Izzard-ded to a new level (what the HELL do they put in that au jus!?) – undeniably the best french dip I’ve ever eaten and in the running for my Top 5 Sandwiches of All Time.

You need to go here.