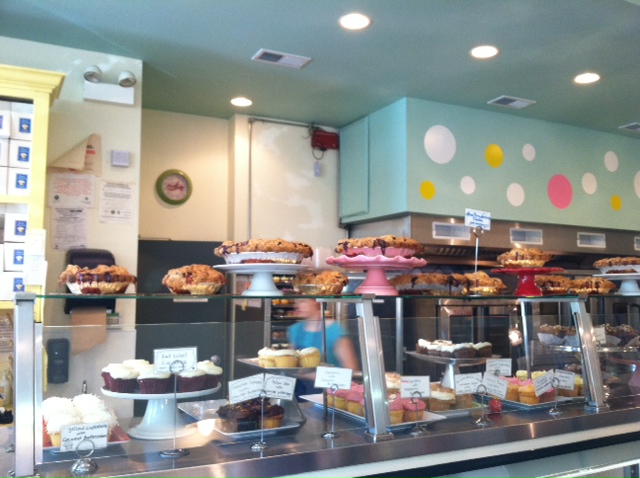 A lone, jacked, tough looking, 6’7″ dude, dressed like LeBron James in a State Farm Commercial, cut past my girlfriend and I as we were turning the corner on Webster to go try a cupcake from Sweet Mandy B’s.

Rude, yeah, but hey he probably had some tough dude stuff to do — but no, with a quick turn, he hops the stairs and ducks his head under the bright yellow and pastel blue doorway and into the sweet shop.

It was a strange sight, this tough dude on a serious mission to get a cupcake, but I now understand his hurry. This guy knew something we didn’t — Sweet Mandy B’s is unbelievable.

First, as soon as you walk in the shop you are slapped in the face by an overwhelming delicious fresh-baked cupcake smell. They should bottle the smell of this place so you can spray it in your kitchen at home.

Everything here is made from scratch and there is enough variety in baked goods to satisfy any taste. They have cookies, cakes, pastries and baked treats I’ve never even heard of.

This place is the invention of a husband and wife pair — the wife has this shop, and the husband owns a candy store. Talk about good life choices.

I had the English Toffee Cabinet Pudding cupcake. It was a miniature mountain of bittersweet chocolate crafted in layers so that there are pockets of fluffy chocolate cake jutting out of the sides in ever direction. They heat it up before serving so the middle is a gooey crater of molten chocolatey pudding and the toffee melts into the chocolate exterior. To say this is the best cupcake I have ever had is an understatement — this was a cupcake in a league of its own.

My girlfriend had a lemon-cream cupcake. I am not a huge lemon pastry fan but the cream on the top of this cupcake was like velvet — it was rich, smooth, and not overpoweringly sweet or lemony. So good.

As far as the tough looking dude, he sat at a table near us and ate his red-frosted cupcake in complete silence, staring at the cupcake the entire time, crumpled the empty paper cupcake liner with a satisfied look on his face and left Sweet Mandy B’s at about a quarter of the speed that he came in with.